Looking out for you since 1973

Get A Quote Today
Why Us

Looking out for you since 1973

Get A Quote Today

An Employee-Centered Company – Come Work With Us

Specialists In Security and Investigations

Headquartered in Mount Pleasant, MI, STT is a trusted industry leader for Uniformed Security Guards, Executive Protection Personnel, Employee Screening, Consulting, and Private Investigative Services. Operating nationwide, STT Security Services delivers a comprehensive portfolio of security, safety, and investigative work that is dedicated to supporting your needs. Our seasoned and credentialed professionals ensure your security concerns are handled by some of the best in the industry.

STT provides services that can assist nearly every business, organization, or individual. We have 50+ years of experience in developing unique programs for an array of different businesses. Industry-specific training, reporting technology, and covert data collection are a few of the reasons clients from coast to coast have partnered with us. From Fortune 500 companies to small businesses, STT offers solutions that reduce risk, control costs, and improve your business’s bottom line. Contact us today to find a security solution that suits your needs.

Not Just a Contract – A Partnership

At STT, we want every client of ours to feel like a top priority, and that’s why we treat you like one. STT provides year-round assistance and actively finds ways to bring value to each dollar spent. We regularly work with our staff on-site to ensure your requests are fulfilled in a timely and appropriate manner. We pride ourselves on the relationship we build with our customers and are regularly keep in contact to ensure our services are exceeding expectations. Whether it be upscaling security on-site, providing extra staff for special events, or any other requests from the client, STT’s professional personnel provide a quick and effective solution to your needs.

Coast to coast, from mine to movie theater, we understand the unique needs of every industry.

One does not come without the other, and we go the extra mile to make sure both are satisfied.

Put credentialed private investigators with decades of experience to work for you.

Investigative solutions that get you or your business the information that you need.

Our seasoned experts help you train, prepare, and be aware.

Today’s world requires us to be vigilant; use special knowledge and skills to protect your business.

Professional assessment and advice from credentialed professionals of the industry

Don’t just take our word for it – check out these reviews from current employees, clients, and alumni staff.

“I have worked in a lot of places. But I can’t think of one where I’ve admired and respected the employers more.”

“STT hired me before I was even off of Active Duty. For the 4 months I’ve been with them now, I’ve worked 2 sites in which the environment was great. Management recognized quality work immediately, and I was offered more opportunities I quickly took advantage of. I’ve met most of the good folks that make the company grow, and they would give you the coat off their back from my perspective.”

“It’s a great company to work for… they really do care about their employees.”

“I have been working for STT for a year and a few months now, and I can honestly say I have never worked for a better company. The owners and site supervisors I have encountered have always treated their employees with the utmost respect and dignity.”

“Great company to work for; the owners are hands on. They care about their employees. Great work quality of life.”

“STT definitely knows how to get the job done no matter what the tasks are. Easy going with clients and well-managed officers. STT is a wonderful company to consider when it comes to safety and investigations. To those looking for a change of employment, I recommend giving STT a try.”

“It is refreshing to know that STT’s corporate staff really appreciates and supports their officers.”

“STT has been one of the best companies I have ever worked for… Corporate leadership is always helpful and honest… If you are serious about a career in law enforcement or security-related fields, you will not find a better organization to work for.”

“The management team [at STT] genuinely cares for their employees and does what they can to keep a balanced work life.”

“The STT personnel I recently worked with at a Michigan festival were friendly, well turned out, and interacted well with both festival staff and attendees. They provided insight and a good solution to one potential incident before it became something more – highly recommended.”

“Very pleasant to work with. Staff did an excellent job at our event.”

“We appreciate the wonderful customer service, attention to detail, and the added security you provide to us and our residents. Keep up the great work!”

Joaquin Geurrero worked for STT Security for four years beginning back in 1986. Since then, he has gone on to become a Police K9 Handler/Trainer and Animal Control Officer… Read More

Joaquin Geurrero worked for STT Security for four years beginning back in 1986. Since then, he has gone on to become a Police K9 Handler/Trainer and Animal Control Officer. His passion resides in partnering with dogs on the police force, and it also encompasses rescuing abused and neglected dogs. Guerrero served over 30 years in the public sector, providing rehabilitation and training to canines both in and out of the police force. His partner, Rookie, assisted him in search and rescue the day after 9/11.

Retired, Guerrero took on the role of an Animal Care and Control Officer. He now dedicates most of his time to giving back to the communities he serves. He is also a successful actor, starring in six movies with a seventh underway. Joaquin is a published author as well, and he often does book-signings at Barnes and Noble – specifically hosting the events for veterans.

We conducted a brief interview with Joaquin to dissect how his role with STT Security paved the way for his professional career.

What was your role when you worked for STT?

How would you describe your time working for us?

What was your favorite part about the job?

What are your favorite stories/tidbits from your time with STT?

Joaquin Guerrero is currently filming his next movie, Warpath. He is also shooting a trailer to promote his current training canine, Little Chief, titled The Adventures of Little Chief. Freezin’ for a Reason is an initiative that brings attention to the effects of cold weather on pets that are left outdoors in the winter months; Guerrero spent a night in the cold to raise awareness about these issues.

Joaquin explained that he takes part in these types of extracurricular work because he enjoys it and it’s fun to take part with the community and people he’s served.

Jessica Townsville, a former STT Security Supervisor, graduated from the Detroit Police Academy with a Firearms Proficiency Award. She will go on to… Read More

To Protect and Serve

A former STT Security Supervisor, Jessica Townsville, graduated from the Detroit Police Training Academy with a Firearms Proficiency award late last month. Officer Townsville and 40 others graduated the academy and are now part of the Detroit Police Department’s class of 2019-I and 2020-A. Her dedication to keeping those around her safe was especially evident when she was an officer for STT. Her achievements are impressive but not surprising to those who know of her hard work ethic and courteous nature. The STT Security team extends a grateful congratulations for continuing the pattern of excellence we see in those who protect and serve. 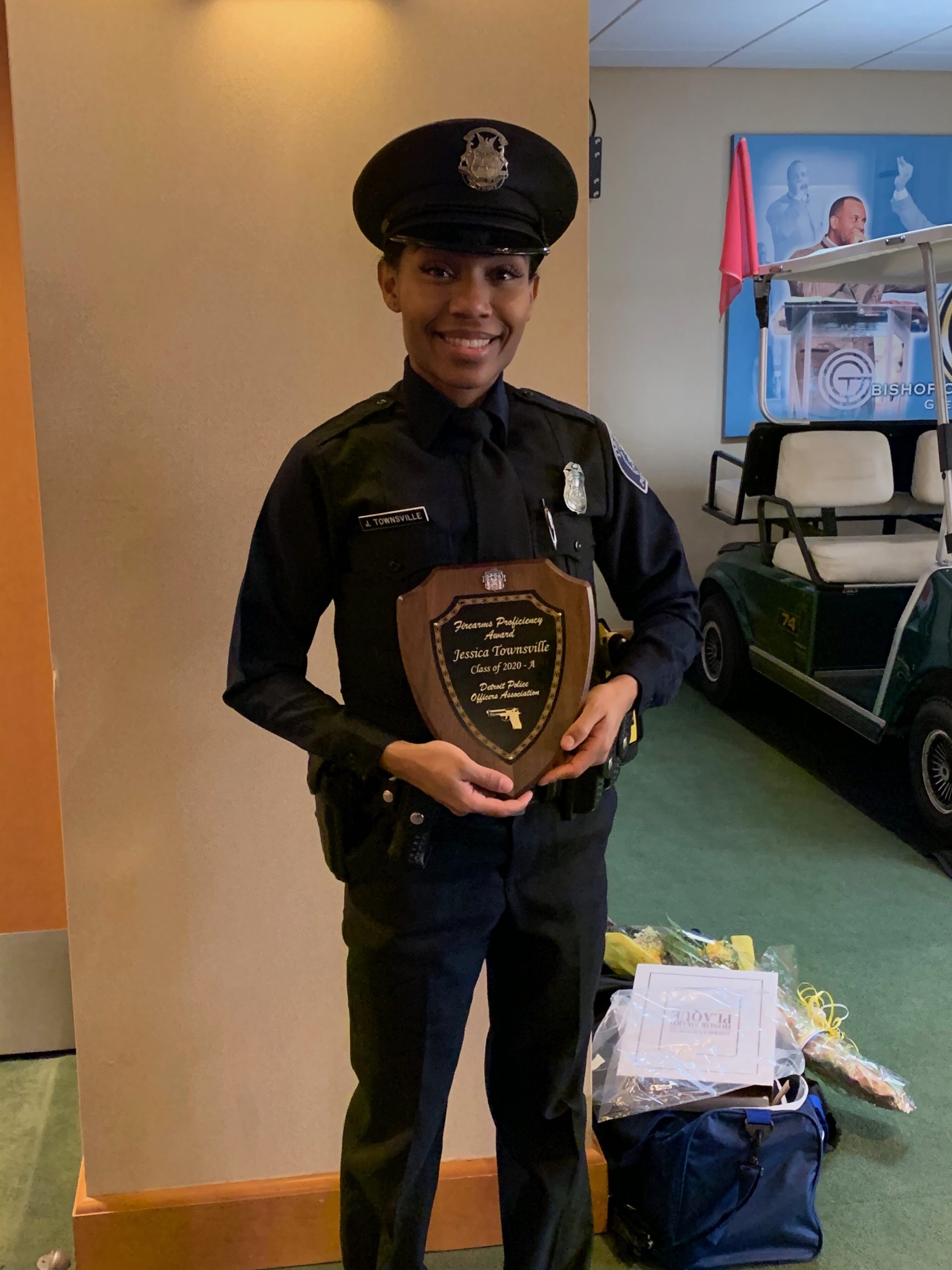 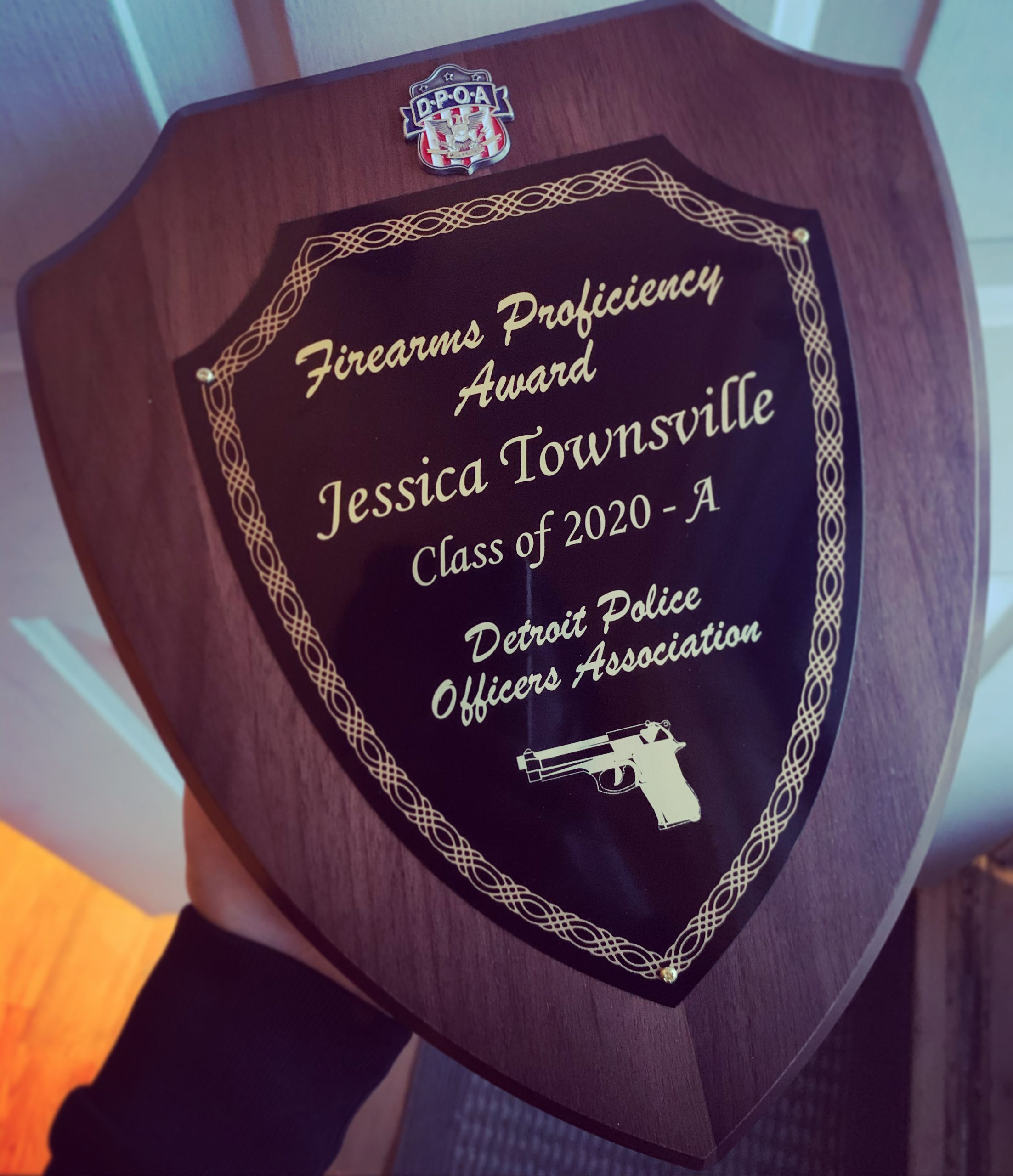 The Detroit Police tweeted a video of the two graduating classes shortly after they took their oath. The tweet says:

“Today, 41 Police Academy Recruits accepted the Oath of Office to become members of

@detroitpolice finest. Congratulations to graduating Class of 2019-I & 2020-A. #ProtectAndServe#OurCommunity“

A direct link to this tweet and the accompanying video can be found here.

Some might remember the story of Officer Townsville saving a puppy from a hot car in the summer; this story was shared on our Facebook page: 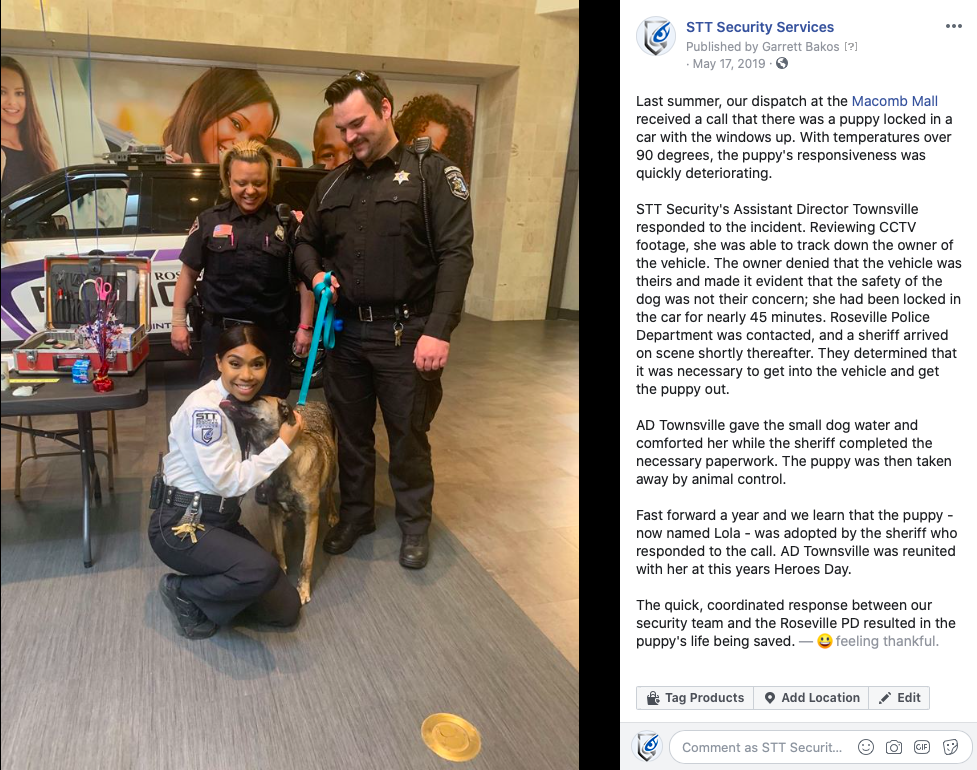 You can find the direct link to this post here.

Every angle of our business revolves around these core values. With these in mind, we are able to provide unparalleled services to both our clients and staff.

We make sure that our clients and staff are always kept on the same page. Offering open dialogue allows any concerns to be addressed immediately and ensures that everyone is kept in the loop.

Life happens, and we understand that. If there are any issues, discrepancies, or concerns with our staff or contract, we will be the first to address them and reach a quick resolution.

Our staff is the core of our business. Without these great people, we would be unable to offer the exceptional level of service that we provide; this is why our organization places a strong emphasis on employee satisfaction.

As an organization, we understand your needs are continuously changing – and so is our industry. We are well-equipped to dissolve any disruptions in our services to ensure we’re exceeding expectations.

As a professional business, we are committed to positively impacting the people and community we serve. We do so by partnering with and supporting the following organizations:

Learn more about our company, people, and culture. These resources provide helpful information and boast our newest content.

We leverage our experience and best practices from industry-leading professionals. These organizations assist us in providing the best possible service to our clients.